[BoxingScene.com] Canada’s Boxing Gyms Are Carefully Weighing How To Reopen

The effects that COVID-19 has had on the sport of boxing have been most visible in the professional game. Fights have been cancelled, income has been lost and the momentum of many promising careers has been halted. But the greater overall impact will be felt down the line, due to the damage suffered on the amateur level. While those who have made it to the top of the sport are in a holding pattern, there is great concern about the sport’s capacity to develop new fighters in the future.

Many of North America’s boxing gyms have already shuttered, and many others are fighting to stay alive, caught in the partisan divide of reopening or remaining closed. Rules around what can or can’t open at this time are legislated on a state level in the United States and a provincial level in Canada, putting the safety of the fighters and the onus of the future of the sport in the hands of state and provincial organizational leaders.

In provinces such as Alberta and British Columbia, some amateur boxers have returned to the gym. In Ontario, the province approved the reopening of “indoor and outdoor non-team sport competitions that can be played under physical distancing measures” as of May 19. This only applies to boxers and clubs who are registered with Boxing Ontario. In short, it pertains to competitive fighters, but not yet to recreational athletes.

On May 21, Boxing Canada released a nine-page document outlining suggested safety measures and sanitary protocols. Among other things, it stated that no sparring, mitt work or partner work of any kind take place, and suggested that all non-athletes, which are limited to provincially licensed coaches, wear masks during sessions as well. Organizational leaders, such as Boxing Ontario president Jennifer Huggins, must now take these mandates and suggestions and formulate a Safe Sport plan to return to physically distanced training.

The risks of going to a gym with COVID-19 still in transmission are well known by this point. Even without direct physical contact, gyms inherently involve heavy breathing in the same airspace, touching of shared surfaces and a whole lot of subsequent face-touching once people begin sweating. In the case of a boxing gym, “returning to normal” would mean the frequent transfer of sweat, saliva and blood. As long as community transmission is still taking place, gyms stand to be one of the most dangerous places on the planet in terms of COVID transmission if they aren’t exceptionally careful.

“There’s a lot of concern due to the amount of bodily fluids involved in boxing, however, we’re taking a look at everything and making sure that we’re going to be overly safe, rather than sorry,” said Huggins, who is working alongside a KO COVID task force, which includes several doctors and ringside physicians, to come up with protocols for gyms across the province. “From an official’s standpoint, I don’t think we have to rush this process. The athletes aren’t going to be competing any time soon, we don’t have a set date in place for when boxers are going to be allowed to do contact, so they’re really just getting back in the gym to get in shape for the eventuality of being able to compete again.” 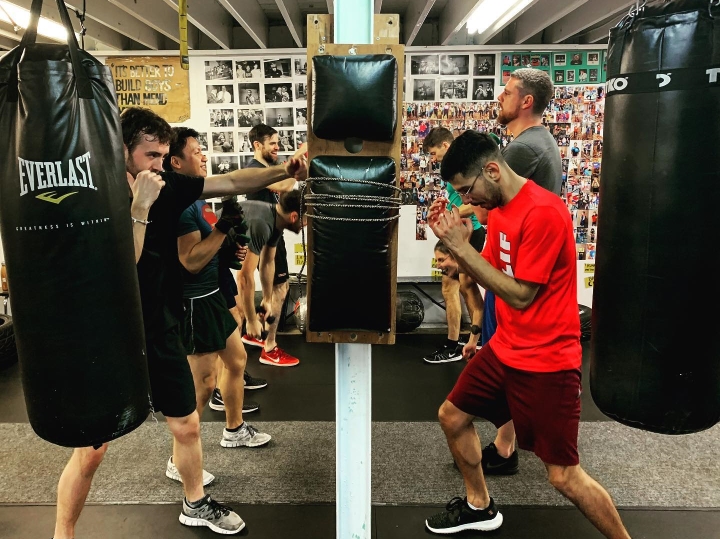 There is the potential of gyms reopening in Ontario on May 29, provided Boxing Ontario arrives at an agreement with regards to safety standards and the gyms then implement those measures. What that will look like is still unclear, but it’s safe to assume it will mean very small groups of competitive fighters allowed in a gym simultaneously (if not one fighter at a time), with only bag work permitted and in-ring mobility allowed for one fighter at a time.

The unfortunate reality is that, as with the containment of COVID-19 generally, this will put a tremendous amount of personal responsibility on gym owners, fighters and trainers. If one person abuses the honor system—if one mask is removed, if one round of sparring is allowed – the potential damage is far-reaching.

“If one gym does something wrong, it affects all of the gyms. Something wrong doesn’t mean that we just get shut down, it means the illness and potential passing of a human being. That’s not something you want to have sit on the shoulders of your organization, or on the shoulders of the gym or as a person,” said Huggins. “I think we have to look at the big picture. Yes, business is suffering, and it’s very hard for me as a business myself to say this, but at the same time, you can have business suffer but do something for the greater good, or we can have the entire world suffer because we decided to rush things.”

Of concern for Boxing Ontario and governing bodies like it is its ability to keep its competitive athletes motivated in the interim. Top level amateurs now at least have a tentative 2021 Olympic date to work towards, which means qualifiers would likely take place (and resume, in the places where tournaments had to halted) in February. In order for those to happen though, fighters would have to first take part in local competitions, which as of now, can’t possibly have a return date even tentatively set. While professional fighters will receive leeway from governments because boxing is their vocation, amateur boxers can’t make that same argument, and as such, aren’t likely to receive the lax treatment certain jurisdictions have given pros with regards to returning to competition.

According to a survey completed by club owners in Ontario in early May, there is the real possibility of the province losing up to 50% of its boxing gyms due to COVID-19. As Huggins points out, many boxing club owners are sole proprietors and contractors rather than registered businesses, and as such, don’t have governmental relief or protection. Many gyms and coaches will now potentially have to team up in order to keep their dreams, and those of their fighters alive.

Collectively, gyms and coaches that house and train amateur fighters are an essential pipeline for the sport and their respective communities. The benefits of amateur boxing go far beyond its service to professional boxing in terms of mental health benefits and community support in a variety of ways. The closure of boxing gyms would have a crushing impact on many lives, let alone the future of the sport. With no in-ring fights scheduled, the amateur boxing community has a larger, mutual one to take up in the meantime.

“It’s been really interesting to see how coaches are banding together, and the athletes, because they’re not competing against one another, they can be on one another’s team and motivate each other. I’ve seen a lot of that. Organizations are being forced to do more, coaches are being forced to be interactive. Athletes used to be the only ones expected to put themselves out there for people’s enjoyment, but now coaches have to be on that same level, organizations have to be at the same level. We have to offer and provide new strategies to deal and cope with this new situation,” said Huggins. “I would say there’s been a lot of good that’s come out of it. The boxing community has come together in ways that couldn’t have happened without this pandemic.”

Jennifer Huggins owns and operates Kingsway Boxing Club in Toronto, Canada. As an Olympic Level Boxing Referee with AIBA International Boxing Association, she works the sport from the inside out. In addition to being a Canadian National Coach at her gym, Jennifer is the Founder and Executive Director of the Fight To End Cancer. She is heavily involved in the community, however still manages to find the time to travel the world performing with a World Class Magician.